The Groups of Tourism

The logic of tourism is often divided into two almost unequal parts: the space occupied by the host culture and what that space becomes when it is invaded by tourists. Tourists themselves can be split into three groups:


These separate groups of tourists have different ways of viewing when it comes to the landscapes; Travellers are more dedicated and seek to gaze upon the landscape, Tourists are the middle ground and often merely glance at the landscape. Finally, Trippers are concerned with a superficial gaze of landscapes, they see in blurs, snapshots and fleeting blinks (their photographs serve as a more permanent reminder of their time).


“I have first of all to confess to a considerable dislike of photography as everyman practices it. I detest the sight of bands of tourists armed with cameras, and snapping everything, like so many piranha-fish”


Within these three groups, there is still continuity in the way that the English landscape has been viewed that has changed, which is one of a ‘Stable England’. Even though, everything is not necessarily stable, overcrowding and tourism becoming more commercial has (in my opinion) cheapened our views on the landscapes somewhat.


Before the advent of photography, there were poems and accounts of landscapes, so more often than not people would have to use their imaginations. In the early days of tourism, the viewing of landscapes were for the chosen few (the wealthy in other words), but with the lowering cost of travel, these landscapes became easier and cheaper to access. 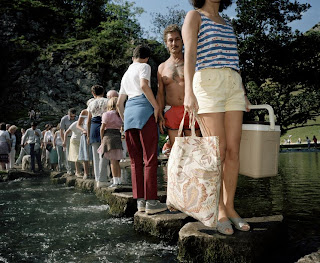 The Grand Tour of the 1700’s was a time when young men would seek enlightenment through travelling, nowadays, this notion of travelling is often to seek to escape for a week or two. In a way, this turns a landscape into a cheap commodity, something one is entitled to see (a ‘Human Right’) whereas the likes of Richard Long and Hamish Fulton fight against this somewhat.


“An object cannot compete with an experience (There are no words in nature)”
Notes from: 'A Dream of England: Landscape, Photography and the Tourist's Imagination', John Taylor
: Fay Godwin, 'Land', (essay by John Fowles, Introduction by Ian Jeffery)
Image from: http://www.magnumphotos.com/C.aspx?VP3=CMS3&VF=SearchDetailPopupPage&VBID=2K1HZOH6RPAS8&PN=34&IID=29YL53ZM319E
Last Quote from: 'An Object Cannot Compete with an Experience', (Sainsbury Centre for Visual Arts, UEA, Norwich, 16 Feb to 29 April 2001)
Posted by Unknown at 02:35