‘Godwin shows through her texts, her photographs and her actions how men write themselves over the landscape and how they succeed in repelling boarders at the boundaries’

Fay Godwin is often celebrated as one of Britain’s greatest landscape photographers, but her images often deal with wanting to sustain ancient patterns of use or passage (Rambling in other words). With Fay Godwin’s work, she is able to one hand, craft a beautiful and sublime landscape image and with the other, tell a much more subtle but often darker story about man’s influence on the landscapes around them.


If we take the image below as an example, we see that the sun is shining the trees casting rays of light on the ground. A beautiful image which some might say is very spiritual. But in the darkness of the trees, we are presented with a gate barring us in (or out). My point is, is that even though landscapes are portrayed as being ‘Free’ and ‘Open’, they are gradually becoming more and more restricted and fenced off to us.

In many ways, we have ourselves to blame for this. The image and quote below adequately sums up man’s arrogance towards nature and the landscape. 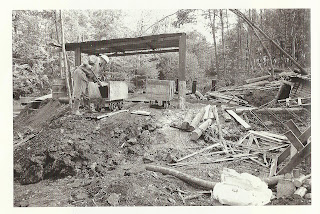 Basically, we can do what we want in the landscape, but we can’t interfere where man has been before. Even though it seen as a preserver of the landscape (among other things), English Heritage also restricts us. Although in some ways, this is a bit of a double edged sword for them, they seek to both protect the landscapes for us, and protect it from ourselves.
Perhaps this sense or notion of 'Escapism' that we often seek, is not that of a physical one, but an escape for the mind instead.
(I meant to put this quote in my last post as I felt it sums up todays modern attitude towards both photography and landscapes as a whole: 'The photograph dates; makes past, inalienably now dead. ((This is why I dislike my piranha-fish tourist photographers, because they so often photograph in order not to have to look; as if having recorded for the future that they were there is more important than the being there')) - Essay by John Fowles, Fay Godwin 'Land')
Notes and second image from:
First image from: http://www.djclark.com/godwin/landmarks/im08/index.html
Last Quote from: Fay Godwin, 'Land', essay by John Fowles, and introduction by Ian Jeffery
Posted by Unknown at 17:07