One form of escapism is often in the form of books. Sometimes, these books will often be set inside a landscape, be it a real life landscape with fictional characters or a fictional landscape (The Lord of the Rings fictional world of ‘Middle Earth’ as an example).


In Bill Brandt’s book, ‘Literary Britain’, he has taken photographs ranging from landscapes to houses and castles and has put these images alongside various pieces of prose, poetry etc. However, these texts are to be used as merely small and helpful clues to try and fully understand what the picture is trying to get across.  The text becomes second place to the image itself, an example of this style is detailed below.


‘Wuthering Heights is the name of Mr Heathcliff’s dwelling, “Wuthering” being a significant provincial adjective, descriptive of the atmospheric tumult to which its station is exposed in stormy weather. Pure, bracing ventilation they must have up there at all times, indeed. One may guess the power of the north wind blowing over the edge by the excessive slant of a few stunted firs at the end of the house, and by a range of gaunt thorns all stretching their limbs one way, as if craving alms of the sun. Happily, the architect had foresight to build it strong; the narrow windows are deeply set in the wall, and the corners defended with large jutting stones’


On its own, the image is an emotive and powerful image of a single house on a hillside. If one has read the book that the passage has been taken from, it fires up their imagination and transports them to that particular place inside their minds.


The image below is a bit darker in tone as it depicts two gravestones in a landscape. The text that accompanies it is from ‘A Journey to the Western Islands of Scotland’ by Dr Samuel Johnson. As I am not familiar with this book, I am going to analyse the image instead. 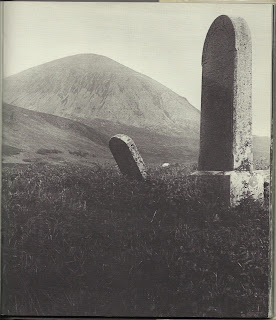 The Graveyard at Strath


Linking this into the idea of escapism, it speaks to me that the only way that you can almost truly ‘Escape’ into a landscape is to be buried in it. When we go on holiday, it is often for a few weeks and the sense of escapism is more down to a psychological feeling (obviously physical as well, but predominantly psychological as we still take our troubles to a landscape).
Notes and images from: 'Literary Britain', Bill Brandt
Posted by Unknown at 13:53